This month our featured museum is one that may not be the easiest to visit, but it is most definitely one that you should know about. 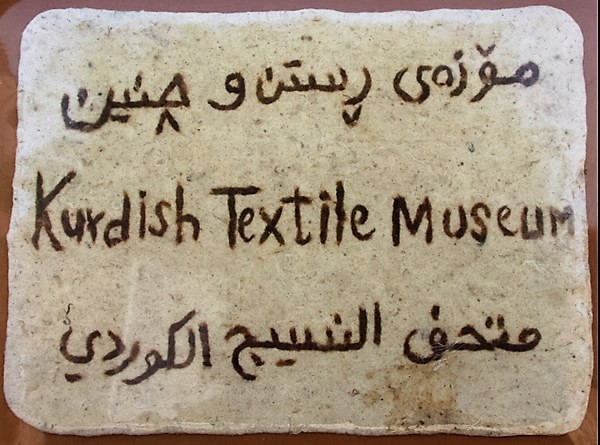 In 2004, Lolan Sipan founded the non-profit Kurdish Textile Museum  in the Kurdistan city of Erbil—a place some say is the oldest, continually-inhabited city in the world. The Museum is filled with weaving from both settled and nomadic groups; conservations efforts are paramount. You will discover here Kurdish carpets, Kurdish hats from various tribes, embroidery, felting, and a variety of traditional clothes. Sipan’s goal in opening the Museum was to preserve the cultural heritage of the Kurdish people. And, as Sipan writes so poignantly, “To develop interest in Kurdish weaving so that this rapidly vanishing culture and its remarkable art will not be lost, but revived and even developed.”

In 2008, the Kurdish Textile Museum began an initiative called The Women’s Income Generation Project. It was initially funded by the United States Agency for International Development. The goal of the project was to create job opportunities for women while reviving traditional Kurdish weaving skills. The program gave experienced nomadic weavers the chance to teach their skills to younger women and to create textiles to sell. Over 40 young girls learned to weave. After the first year, the Project continued until December 2012 with the support of the Erbil Governorate and the Kurdish Textile Museum.

In 2013, the Erbil Citadel, where the Museum is located, was completely closed for public visitors due to restoration. Now that the Citadel is once again open, Sipan says, “we really want to restart the project and the girls are very keen to go back to work.” He is actively looking for a new source of funding.

April 18, 2016 was UNESCO’s World Heritage Day. The Kurdistan region celebrated for the first time, in part, with exhibits of Kurdish costumes from the different areas of Kurdistan. “Heritage is the identity of our nation and protecting it is everyone’s duty,” said Rafiq Rasoul, director of Antiquities and Heritage at the Kurdistan Regional Government.

Everyone’s duty. Thank you, Lolan Sipan, for carrying out yours so beautifully.

All photos used with kind permission from the Kurdish Textile Museum.