Just in time for the release of her new book, Women Artisans of Morocco: Their Stories, Their Lives, author Schaefer Davis drops by to give us the inside story about her work with two very different Moroccan artisans. Thanks, Susan!

Readers often like a sneak preview of a book, so here is one for Women Artisans of Morocco. In a sense it is about the bookends of the book. Fadma Buhassi is a very traditional and accomplished rural weaver; she began when she was five and never attended school. Habiba Lrhachi has a university education and works at a paid city job because of the regular income; although she loves weaving, she only does it in her spare time.

At forty and with nine children, Fadma Buhassi is a master weaver. It was a treat to interview her for the book with a translator since I don’t speak shilHa (Berber). It meant I could ask about things you seldom hear from artisans, like aesthetics and creativity.

Fadma makes a wide variety of rugs. Her husband proudly said, “Anything she sees, she can make.” That year, she supported her family because her husband was not paid. She buys food and clothing, and with any extra, takes the children on a picnic. I asked Fadma about her favorite rug and why she liked it (a question I posed to each of the artisans in the book). Fadma no longer owns her favorite rug. “Sometimes I have a rug I love, but if I don’t have money, I have to sell it.” But she likes a rug with rich red and blue, (at right in the above photo–under my foot). It took a month to make 22 years ago. She likes the colors and says, “When I wash it, it looks like new.”

When Fadma weaves a rug, she says, “You have to think about the whole design from the first, and know how it will end. But you might add some more little symbols.” Fadma likes to create. “Look at this,” she says, pointing to a particular motif in one of her rugs. “I didn’t look at any pictures; I just started weaving, and thinking, and made the design.”

Does she use natural dye, I asked. She tells you in the book. I wondered what Fadma thought about all the things I asked her. “They were really great questions,” she said, “Because I never met anyone who asked me things like that.” Several artisans featured in the book had similar responses: they like to talk about their craft but are never asked.

While Habiba was born in the country, and her mother and sister are rural weavers also profiled in Women Artisans of Morocco, she attended university, lives in Tangier, and supervises housekeepers in a hotel. Yet she still loves weaving.
When she was very small, she wanted to learn weaving. “But the family said ‘you’re little, you have to go to school.’ They wanted me to open up, and know things.” Still, since primary school, “I had the desire to learn anything I saw: knitting, crochet, henna decoration [of skin], and macramé.” And she did learn, on her own.

After university, she found no permanent job but helped me sell rugs from her village on the Internet. As my assistant, she said she learned “how to benefit from the Internet, how to help my country, how to do something that I’m very proud of.” She said,  “When I knock on a woman’s door and pay her for a rug that she was maybe going to throw away, and she uses it to help her children, or escapes from a debt. How do those women react? They look at me like I really helped them out, even if the work was their own. That little effort I made—I always feel proud.”
However, Habiba needed more reliable income than her rug commissions, so she went to Tangier, found a job, and lives in a small apartment there. Both influence her relationship to weaving—and that of many women who live in apartments without space for a loom, have jobs that limit their time to weave, and are exposed to new ideas of what it is possible to weave.

Habiba’s style of weaving is very different from other women in the book. She made the rug shown above with just a crochet hook. “I tried to do a modern design, and tried new colors.” She feels new designs will help women sell their rugs. And unlike other artisans here, she draws the design first. While many Moroccan women weave for their homes or for income, Habiba resembles many American weavers: she weaves “only for love . . . just love, to make something with my own hands.” 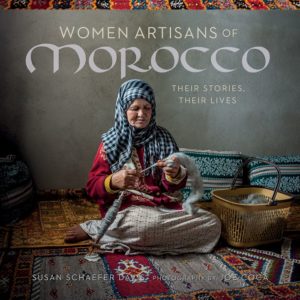 Meet more than 25 Moroccan women artisans and discover their stories in Women Artisans of Morocco: Their Stories, Their Lives.  Available at ClothRoads, Amazon, Barnes and Noble, and your favorite bookshop

2 thoughts on “Women Artisans of Morocco–An Inside Look”