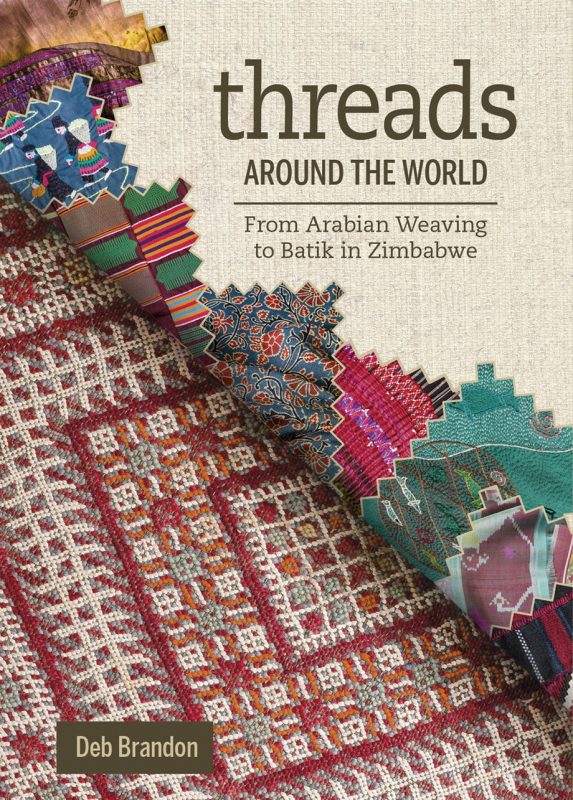 Do handknitted mittens turn away the evil eye in Estonia? Well, maybe. How do you spin pineapple fiber into thread for piña cloth? You don’t. (You just tie single fine strands together.) Can you make Miao shiny cloth without pigs’ blood? Yes you can. Egg whites are an option, or if you’re vegan, maybe yellow bean juice (but skip the water buffalo skin). These are just a hint of the fascinating factoids I lingered over while reading Deb Brandon’s Threads Around the World: From Arabian Weaving to Batik in Zimbabwe. he title suggests an ABC book, but this is really more a cabinet of curiosities.

Brandon has spent years delving into the ways and means and meanings of world textiles, and her explorations leave you breathless at human ingenuity and cultural investment in cloth, from ancient times to right this minute. (If you’re curious about some members of Congress wearing African kente cloth in recent public appearances, you can get fascinating insights into the differences between Asante kente and Ewe kente. And draw your own conclusions.)

We don’t often tout another publisher’s book (though there are certainly good ones out there), but we thought that this one is especially worth your attention. It’s armchair travel at its very best—you’re not just a spectator. You come to understand cultures through their textiles. As the author says, “I look around me at the textiles I cherish, and I see ongoing stories. I see life.”

Here’s a little excerpt from the entry on Berber flatweave. See what I mean?
—Linda Ligon, Publisher Thrums Books

To the Berber, weaving is life.

The lifespan begins as the weaver prepares the loom for weaving and ends when she cuts the finished textile off the loom.

When I first learned of the Berber view on creating textiles, the notion of associating with death filled me with unease. I couldn’t accept it; when I set my scissors to the fabric, I am giving birth to it, sending it off into the world.

There had to be more to it, and I discovered there is: to the Berber, death is followed by an afterlife: when the completed textile enters its home, it is reborn to begin a new life.
The Berber identify the wool, the loom, and the act of weaving with matters of fertility and motherhood. The weaving is a metaphor for the evolving relationship between mother and son in a male dominated society.

Preparing the upright (vertical) loom for weaving includes setting up the frame, winding the warp, and warping, i.e; attaching the warp threads to the upper and lower beams. This process represents the years when a boy lives among the women, under his mother’s protection and supervision.

The act of mounting the beams on the loom symbolizes his passage into adulthood. Berber society views a child as male only anatomically, until his circumcision, which is when he acquires a male identity and takes his place among the Berber men. Analogous to a boy’s coming of age, when the weft first crosses the warp, the textile also acquires a ruh, a soul.

The weaving itself, passing the shuttle to and fro across the warp threads, represents the journey of a mature male through life. The beginning of the weaving embodies a young man’s foray into the world, away from his mother’s sphere of influence. Weaving can be unpredictable, despite the weaver’s best intentions; it is a man’s journey through adulthood into old age, despite his upbringing. Berber weavers associate difficulties in weaving, such as broken warp threads or a delay in progress, with mishaps along a man’s path in life.

Finally, the textile “dies” when the weaver completes it. In the same way the Berber perform last rights for a man who has completed his journey through life, the weaver prepares the textile for its next phase, life after death, or the afterlife in Islam. Before the weaver removes it from the loom, she daubs the textile with salt water and recites the first pillar of Islam (“There is no God but Allah and Mohammed is his prophet”) three times.

The dead pass into the afterlife, and the Berber textile passes into a new life, a rebirth. When it enters its new home, the Berber rug acquires a new ruh, a new soul for a new beginning. 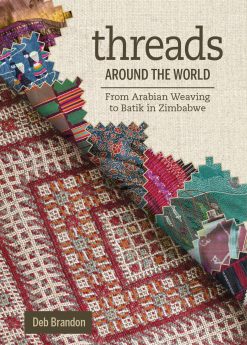 Threads Around the World: From Arabian Weaving to Batik in Zimbabwe